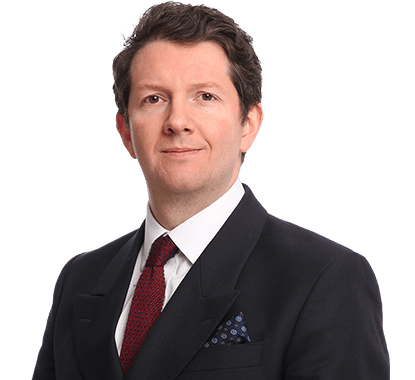 Aidan joined Chambers in 2013 having undertaken pupillage with Kings following completion of his legal studies at Oxford, Cambridge and Paris II (Panthéon-Assas) and having completed a five-month research traineeship at the ECJ (as it then was).

Aidan has rapidly developed his practice, specialising exclusively in commercial and chancery disputes (including insolvency).

With regular appearances in both the County Court and High Court conducting applications, CCMCs, trials and appeals, Aidan has a broad range of advocacy experience.  Aidan is also often instructed in a range of advisory and drafting work.

Outside of work, Aidan is a keen cricket fan, a developing squash and tennis player and a lapsed golfer.

Having studied in Paris and worked in Luxembourg, Aidan speaks and writes excellent French.

Aidan is regularly instructed in a range of banking and finance claims. Aidan has particular expertise in secured lending and in the interrelation between secured lending and insolvency, as well as experience dealing with a range of guarantees and other debt instruments. Aidan regularly appears in both High Court and County Court in banking and finance matters and has extensive experience in drafting and advising on disputes in the financial sphere.

Tubelike Limited (in liquidation) and Others v Visitjourneys.Com Limited

Aidan is regularly instructed to represent and advise clients with commercial disputes, including the sale of goods, agency agreements and guarantees. He also provides non-contentious advice on contracts, something which businesses find particularly advantageous in advance of contract renewal discussions.

Aidan has also advised on jurisdictional issues including forum, choice of law and the enforcement of foreign judgments in England & Wales.

Aidan regularly acts in relation to company disputes including shareholder disputes, share purchase disputes and directors’ duties providing both advice and representation in the High Court.

Examples of Aidan’s work include:

"He is excellent at responding to arguments on his feet, which is a very good asset at the Bar. He is a very straightforward and very responsive barrister." "Aidan is very analytical and responsive, and his written advocacy is persuasive."

"I find Aidan particularly client-friendly. The advice Aidan gives is always commercial and measured. I would often go to London if Aidan were not available and I consider him to be one of the standout junior barristers at the commercial bar in Manchester."

"He is very strong on his advice, can relate to clients very well and gets a handle on the key issues very quickly." "He is an excellent advocate." "He is incredibly bright and astute."

‘Aidan balances a commercial and practical approach with razor sharp technical skills. He is an excellent advocate, who always performs well on his feet.’

"He's very personable and you'd be comfortable giving him more weighty jobs - beyond his years of call." "Tactically astute, he is also really good on technical contractual issues, explaining them so the court can deal with the matter properly."

Download Full Profile
View Privacy Policy
"He's very personable and you'd be comfortable giving him more weighty jobs - beyond his years of call."
Chambers UK
"Tactically astute, he is also really good on technical contractual issues, explaining them so the court can deal with the matter properly."
Chambers UK

Acting on behalf of the appellant, Aidan Reay has succeeded on appeal to the High Court sitting in the Cardiff District Registry.