Gary Grant of Kings Chambers is a specialist practitioner in Planning and Environmental Law.  Gary is experienced in bringing and defending challenges to planning and environmental decisions in the Planning Court.  Recent instructions in the High Court include retail, residential, sporting facilities, listed buildings, loss of employment use, green belt and plan making.  Gary provides legal support to Plan Making Authorities including at EiP.

Gary acts for local authorities and developers at Planning Appeals and related Public Inquiries dealing with the full range of planning and environmental issues.  Gary is recommended in both Chambers UK and Legal 500 including in 2018 as “a highly effective advocate”.

Gary has presented papers to specialist training events held by RTPI, NAPE, ACSeS, LLG and others and is a qualified Civil and Commercial Mediator.

Gary has a wide level of experience of central government work from working on the AG’s Regional Panel and has experience of highways, compulsory purchase, land, environmental, enforcement, contractual and regulatory matters associated with planning and environmental law.

Advising and appearing for and against Authorities involved in the promotion of highways and transportation projects. Promoted highways orders for the Secretary of State in 2003 and 2005, advised a County Authority in 2010 respect of objections to high speed rail links to Heathrow and in 2015 advised and appeared for Manchester United in respect of their representations to the Manchester Metro extension inquiry.

2016:   Objection to the confirmation of a CPO under planning powers in respect of a leisure building at Seaton Carew seafront adjoining conservation area.

2011:   Advising Highways Agency on various development proposals in South West and have an impact on trunk road network, including at North West Quadrant Plymouth and Swindon Gateway. Appearing at Inquiry.

2018: Appeared for developer in support of Secretary of State resisting efforts of LPA to overturn appeal decision for 9 eco homes in countryside in Nottinghamshire.

2017: Challenge to decision of Secretary of State on interpretation of §118 NPPF and strategic policies of recently adopted LP in context of existence of 5 year land supply.  Lichfield DC v SSCLG [2017] EWHC 2242(Admin).

2017: Resisting proceedings for judicial review on behalf of LPA in support of SSCLG. Novel case involving the scope of potential challenge to the presence of statuary ( piers and urns of historic significance ) on the list of Listed Buildings. Reported as Dill v SSCLG [2017] EWHC 2378(Admin).

2017: Resisting application for permission to proceed by way of judicial review of Committee decision to grant permission for Rugby Club raising procedural, ecological and policy issues.

2016: Drafting grounds of resistance for LPA on meaning of affordable housing policy in context of issue on aggregation of proposals. The case was successfully defended by the Secretary of State in New Dawn Homes Ltd v SSCLG [2016] 3314.

2016: Advising and drafting Pre- action in a case against the LPA involving procedural failings and misinterpretation of policy.

2014:  Resisting judicial review of decision to proceed with the execution of compulsory purchase of property under Housing Act powers ( for Derby Council - Planning Court sitting in Leeds ).

2014:  Resisting judicial review of decision to recommend main modifications to the Lichfield Local Plan involving the release of land from the Green Belt and consideration of the ambit of the statutory ouster under section 113 of PPCA 2004 reported at [2014] EWHC 2440 (Admin).

Advising upon and dealing with development proposals within a wide range of environmentally sensitive designations including AONB, SACs, Ramsar sites and conservation areas, including cases involving issues of sensitive design.

Enforcement appeals and environmental prosecutions, including in 2015 a prosecution of a noise abatement notice in respect of a clay pigeon shoot.

2017: Resisting proposals at a planning appeal into proposals for a new Care Village on the site of a disused Poultry Farm in Wychavon, opposed on grounds which included the impact of major development in the AONB.

2016: Planning appeal at Public Inquiry in Stratford for housing in rural village raising impact on county level grassland habitat and the evaluation of mitigation proposals.

2015: Prosecuting a noise abatement notice breach in respect of clay pigeon shooting before the Lay Bench.

2013: Enforcement appeal inquiry concerned with conversion works of barge hull to large houseboat on the foreshore of SSSI ,SAC and Ramsar at Hayling Island (Havant) (for LPA ).

Gary has expertise in Section 78, Call In and other Inquiries dealing with the full range of planning and environmental issues and covering a wide range of land uses. Recent inquiries include urban extensions (housing and mixed use), retail proposals, waste recycling proposals, business park proposals and housing in a national park.

Gary provides legal support for development plan examinations and for CIL examinations both for the Plan Making Authority and for objectors.

Advising, drafting and appearing in planning related litigation including injunctions.

Housing and Mixed Use

2019: Appeal for proposals for 40 houses at Milford on Sea ( New Forest District ) raising issues of viability and tenure. ( for Appellant ).

2018: Appeal proposals for sheltered housing scheme at Shipston on Stour , townscape and highways ( for LPA ).

2015: Call in Inquiry at Watery Lane, Curborough, nr Lichfield in respect of up to 750 houses and associated development ( For LPA ).

2014:  Promoted proposals for housing within the National Park at Petersfield at Inquiry ( Appellant).

2013: Appeal Inquiry at Midsomer Norton, Somerset for the LPA

2013: Call in Inquiry at Salford, Bath in the Green Belt.For LPA

2019: Legal support for examination of the Wiltshire Site Allocations Plan heard in the Spring of 2019.

2018: Legal support for examination of the Wyre Local Plan heard over 3 weeks in the summer of 2018.

2017: Legal support for EiP of Hartlepool Local Plan which was examined in public over 3 weeks in September-October 2017.

2016: Legal Support for EIP of the Main Modifications to the Stratford Local Plan (Core Strategy) which proceeded to adoption in July 2016.

2015: Appointed to provide discrete legal support in respect of part of  the Gloucester, Cheltenham and Tewkesbury Joint Core Strategy

2013: Leading objections into Wiltshire Core Strategy on behalf of developer consortium Chippenham 2020, based on inadequacy of sustainability appraisal and compliance with SEA Regs.

2013: Appeal Inquiry at Barfold Farm , Surrey concerned with the intensification of elite polo use in Green Belt and AONB. For LPA

2011: Call in Inquiry on conjoined appeals for the proposals of London Irish RFC to develop a large training facility in the Green Belt and to redevelop the existing ground in Sunbury for mixed use. For LPA .

2018: Proposals for a sheltered housing scheme in the Branksome Park Conservation Area raising issue of heritage, design and land supply ( for LPA ).

2017: Residential proposals for a site opposed in terms of the impact on the World Heritage City of Bath and quality of design ( for A ).

2016: Appeal hearing for 90 dwellings within the setting of a registered battlefield at Kineton.

2013: Appeal Inq promoting Planning and Listed Building consent for the Whiteladies former cinema (Bristol), change of use to gym together with residential.

2012: Appeal inquiry promoting demolition of house in conservation area in Branksome and it’s replacement with a high quality design by award winning architect.

2015: Enforcement appeal in respect of waste recycling facility in the Hampshire Countryside (for MWPA )

2018: Junior to Paul Tucker QC for Appellant : Call In Inquiry into retail proposals by Orbit Investments at Handforth Dean consolidated with proposals by CPG – 4 week inquiry .

2017: Public Inquiry: Junior to Paul Tucker QC in relation to proposals for a foodstore in Somerset ( for A ).

Gary provides calm, clear, and commercial advice, which is invaluable to clients. He can always be relied on to engage with clients sensitively, and to depose opponents' arguments elegantly, but definitively.’

"He's authoritative, which gives confidence to the client and the professional team."

"Gary is very eloquent, but he'll really fight the corner when he needs to."

"He provides detailed and forensic advice and builds good rapport with clients."

"He combines a calm but effective advocacy style at planning inquiries with excellent written advice and a a good rapport with clients."

"A calm, considered and skilled advocate. "

"He focuses on the main issues and is popular with clients." "Really skilled, very calm and considered, really responsive and flexible."

‘A sound and sensible operator.’ 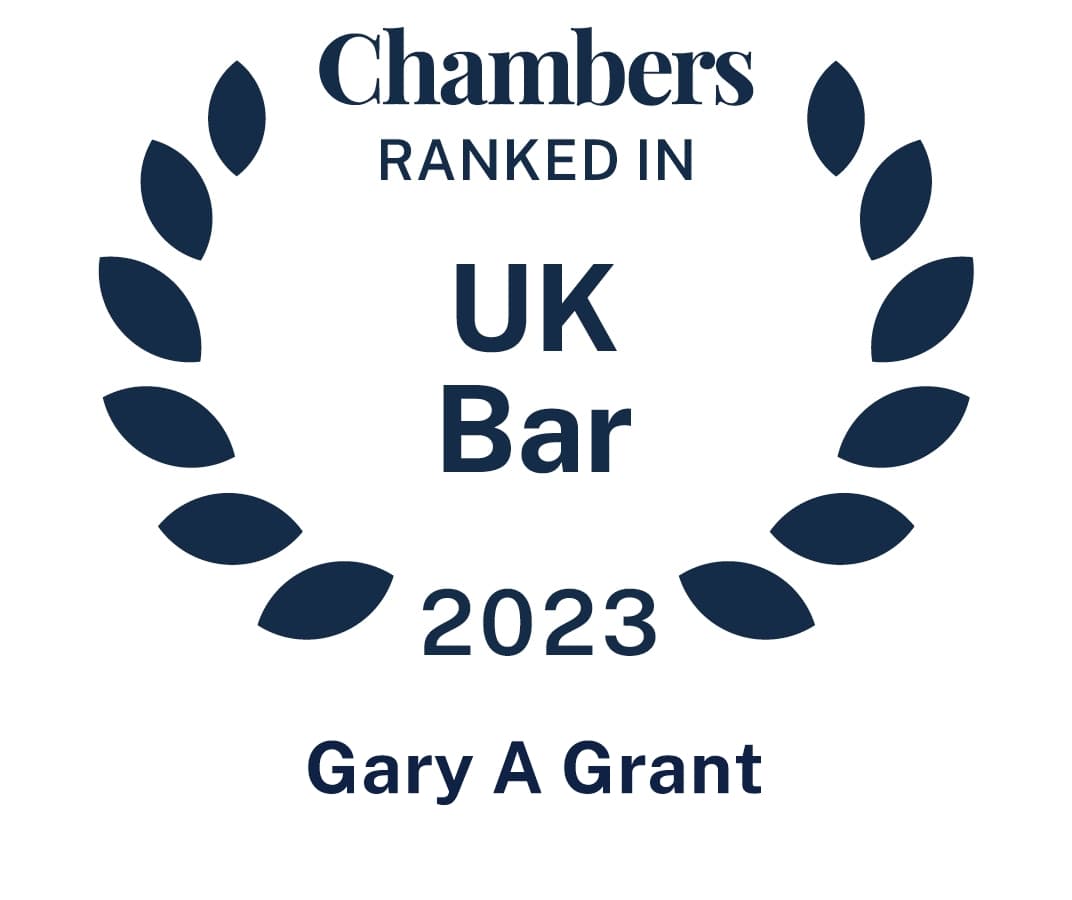 Gary Grant in Successful Appeal for Scheme in New Forest

A scheme for 42 dwellings in Milford on Sea in the New Forest District was allowed following a public inquiry.