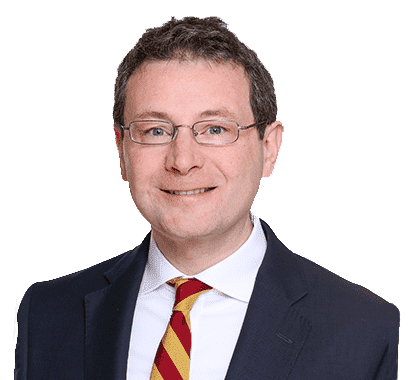 Andrew Latimer appears in the Business and Property Courts and since 2017 has appeared twice in the Court of Appeal without a leader and also as a junior in the Supreme Court. His commercial practice includes unfair prejudice petitions, claims for breaches of directors duties, partnership claims, breaches of warranty disputes, claims for misrepresentation and professional negligence arising out of business and property work.

He appeared at trial and in the Court of Appeal in Regency Villas v Diamond Resorts without a leader and as a junior counsel in the Supreme Court in 2018. He has advised in relation to easements at the Richard Seiffert-designed Gateway House beside Manchester Piccadilly station, has advised on easements involving two airfields, rights of entry by utility companies to private land and on mobile telephone masts and rights under the Electronic Communications Code.

He writes for Sweet & Maxwell’s Commercial Litigation: Pre-emptive remedies and has appeared in several cases on civil procedure which are referred to in the White Book (see Civil Procedure section below).

He had a pedigree bull names after him, Deveron Latimer, in the course of a case concerning the extent to which damages could be recovered for economic loss caused by negligence.

Hughes v Whyatt [2019] EWHC (HHJ Stephen Davies, defeated allegation of forgery of signature and fabrication of documents after 4 day trial. Judgment deals with issues of declaration of trust of shares and defence of illegality)

Quinn v Bank of Ireland [2018] EWHC (HHJ Pearce, obtained reverse summary judgment on a claim for breach of duty of care in ‘allowing’ a nursing home business to go into administration and for alleged misrepresentation in the course of taking a personal guarantee)

Shafi v Rutherford [2014] EWCA Civ 1186 (CA, construction of agreement relating to expert determination and whether an expert was free to depart from earlier sets of accounts in computing liabilities)

Penny v Montagu (led by Lesley Anderson QC in a minority shareholders petition with 13 days of interim hearings and 4 written judgments on interim applications. The trial settled in early 2012 after 8 weeks in court)

The Anglo-Eastern Trust v Kermanshahchi [2003] BPIR 1229 (Hart J, led by Paul Chaisty QC at trial of £1.4m claim for repayment of loan monies and proceedings under s.423 of Insolvency Act 1986 to recover property transferred by Defendant to his wife before delivery of judgment in summary judgment application)

Penny v Montagu (led by Lesley Anderson QC in a minority shareholders petition with 13 days of interim hearings and 4 written judgments on interim applications. The trial settled in early 2012 after 8 weeks in court)

Eskape v Route [2011] EWHC 1635 (HHJ Hodge QC, 15 day trial in the Chancery Division concerning allegations of breaches of directors duties, passing off, misuse of confidential information and economic torts and a cross claim for minority shareholders prejudice and/or just and equitable winding up)

Andrew Latimer advises on partnership disputes including disputes involving solicitors’ partnerships. Many of these cases can be resolved out of court. Recent cases which have proceeded to trial:

Re Lloyds Autobody Limited [2018] EWHC 2336 (HHJ Hodge QC: 12 day trial of an unfair prejudice petition and a second set of partnership proceedings involving just and equitable winding up of partnership)

Rogers v Barr [2017] EWHC 1423: (David Halpern QC: 8 day trial concerning issues of whether a property partnership was formed overseas and the dissolution of that partnership. The trial also included taking evidence by videolink)

Regency Villas v Diamond Resorts [2018] UKSC 57 (Supreme Court) and [2017] Ch 516 (CA and HHJ Purle QC) novel point on whether English law recognises an easement to use recreational facilities such as a golf course or swimming pool for free. The Supreme Court decided that English law did and surveyed law from Commonwealth jurisdictions on the point. The case has significant implications for the principles surrounding recognition of easements in English law and commercial implications for landowners who would otherwise charge for use of expensive recreational facilities.

Piccadilly Gateway Limited v Network Rail: advised on right of way litigation at Gateway House, Manchester (designed by Richard Seiffert in the 1960s) over the approach to Manchester Piccadilly station and access to a multi-storey car park.

Andrew Latimer edits chapters for Sweet & Maxwell’s Commercial Litigation: Pre-emptive Remedies loose-leaf on Summary Judgment and Default Judgments. He has been involved in several cases noted in the White Book (ICI, Anglo-Eastern and Lunnun) turning on civil procedure as well as others in the Court of Appeal and at first instance:

Burnden Holdings (UK) Ltd v Fielding [2014] EWHC 3356 (HHJ Hodge QC, CPR 31.14 and how specific the reference to documents in a witness statement must be before disclosure is ordered)

The Anglo-Eastern Trust Ltd v Kermanshahchi, Times, 8 November 2002, (Park J, addition or deletion of penal notice on order, prior to service, without returning to court)

Lunnun v Singh, Times, 19 July 1999 (CA, extent to which causation and contributory negligence can be disputed on assessment of damages following default judgment)

Trustee of the Kings Chambers and Ian Mark Cooper Trust (2018)

"Andrew has a great legal brain. He is a strong advocate."

'Andrew is a perfect gentleman, always impeccably prepared for any court hearing or conference with clients. His breadth of knowledge and experience is very impressive and his advice is always sound.'

"Andrew Latimer is very clear and methodical; he is very pleasant to work with."

"Andrew is definitely a star in the making. He is thorough and presents very well."

"I find him to be one of the most reliable and professional barristers I work with." "He's good at what he does, and he is honest, straightforward and easy to deal with."

"He's a ferocious advocate and he really gets stuck into a case." "He has a huge brain and he wears it very lightly."

"Andrew is a meticulous and thorough individual who is always well prepared for conferences and hearings. His preparation for witness cross examination is excellent and his submissions in court are impressive."

"Andrew is very much a star and someone we would highly recommend. He is very good on paperwork and a first-class advocate."

"He has an incredible ability to get to grips with the detail of a complex dispute at the outset. He has extraordinary legal and technical knowledge."

"He is very reasoned in everything he does." "He is very intellectual and very bright."

"Andrew Latimer is a very good junior. He has a dry sense of humour. You have fun working with him without any loss of attention to the minutest detail of the cases." "He is very thorough and robust."

"Clients and solicitors love him. He is always a master of his papers, and is calm, intelligent and very effective in court." "He is very proactive, and has especially good insight as to the tactical steps required to close a matter down."

"His advocacy always hits the right note and he's excellent with clients." "He is a master of his papers, calm, intelligent and very effective in court."

"A great mix of aggression and pragmatism."

"He is very good on his feet and great with clients. He can bring a very tranquil attitude to quite fraught matters." "A great all-round lawyer, and I know many people adore him."

"He is absolutely excellent - extremely good to work with, good with clients, a strong advocate and one of the rare barristers who is very good at mediation and negotiation, but is also prepared to fight."

"An extremely bright barrister and skilful advocate who is good at thinking on his feet in court. Held in high esteem by his peers, he is straightforward and highly perceptive."

"He provided excellent, well thought through and perceptive advice. His advocacy always hits the right note and he's excellent with clients."

Has a comprehensive commercial and chancery practice, which covers partnership and shareholder disputes, commercial property and professional negligence. He is a favourite with solicitors, who value his "fantastically bright, can-do attitude." …"He is very hard-working. He's not only academic, but able to get into detail in a practical sense too." (2015)

"He is excellent on his feet, has outstanding technical knowledge and is very approachable." "He is a very robust advocate with a unique and impressive sense of humour." (2014)

Recommended for Chancery by Chambers UK every year since 2007:

"He is an amazingly skilful cross-examiner. He never shows any emotion, is courteous to a fault and never rises to bait." "He has a laid-back approach which can be absolutely invaluable - he keeps things in perspective. He is vicious and withering in written arguments, but his manner remains laid-back and affable." (2014) 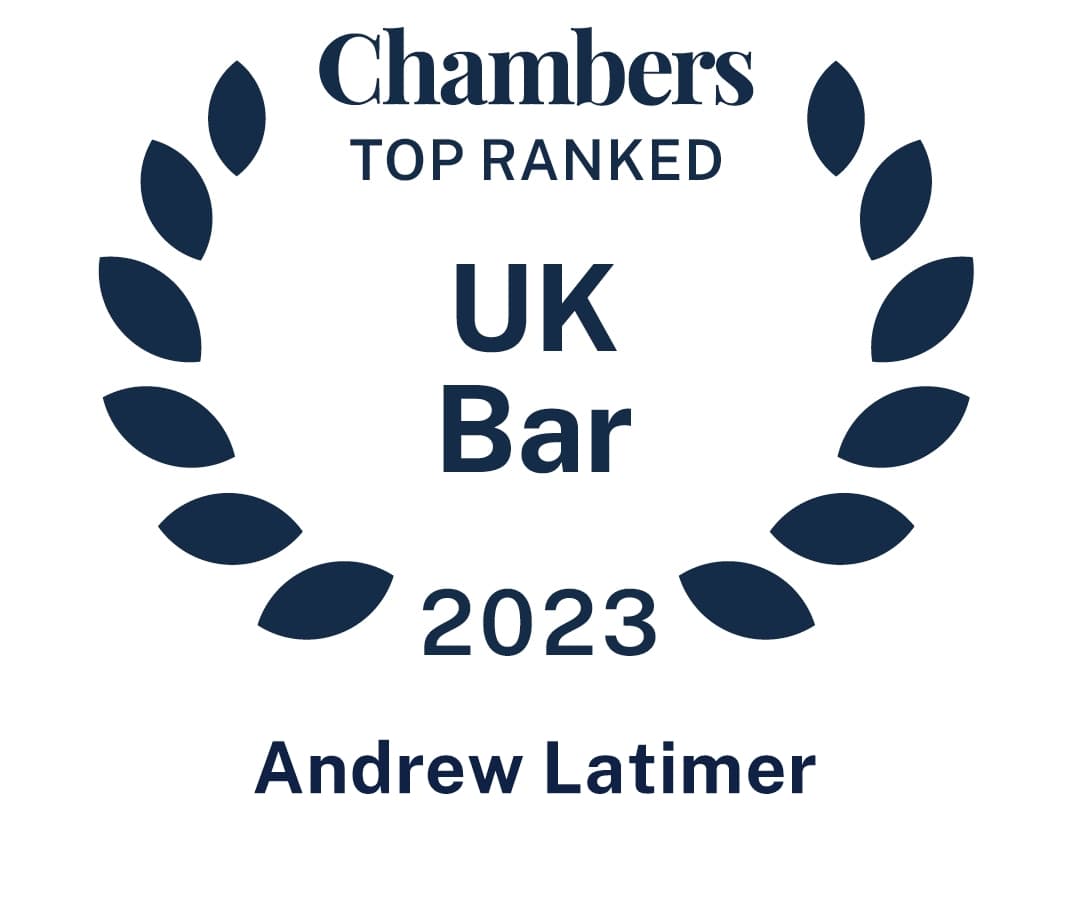 Download Full Profile
View Privacy Policy
"He is absolutely excellent - extremely good to work with, good with clients, a strong advocate and one of the rare barristers who is very good at mediation and negotiation, but is also prepared to fight."
Chambers UK
"Unflappable and dedicated."
Legal 500